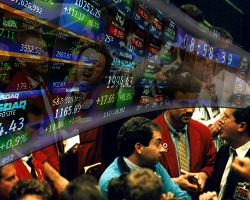 After showing a lack of direction early in the session, treasuries moved modestly higher over the course of the trading day on Thursday.

Bond prices spent the morning lingering near the unchanged line before moving to the upside in afternoon trading. Subsequently, the yield on the benchmark ten-year note, which moves opposite of its price, edged down by 1.4 basis points to 1.287 percent.

The uptick by treasuries came following the release of a slew of U.S. economic data, including a Labor Department report showing initial jobless claims came in well above economist estimates in the week ended February 13th.

Economists had expected jobless claims to dip to 765,000 from the 793,000 originally reported for the previous week.

However, traders have often looked at recent disappointing jobs data in a positive light, believing that it will put more pressure on lawmakers to pass additional stimulus.

A separate report from the Commerce Department showed housing starts pulled back by much more than expected in the month of January.

The Commerce Department said housing starts tumbled by 6.0 percent to an annual rate of 1.580 million in January from a revised December estimate of 1.680 million.

Economists had expected housing stocks to decrease by 0.7 percent to a rate of 1.658 million from the 1.669 million originally reported for the previous month.

Meanwhile, the report also said building permits spiked by 10.4 percent to an annual rate of 1.881 million in January from the revised December rate of 1.704 million.

Building permits, an indicator of future housing demand, had been expected to slump by 1.8 percent to a rate of 1.678 million from the 1.709 million originally reported for the previous month.

The Labor Department also released a report showing a bigger than expected jump in import prices in the month of January.

Following the slew of U.S. economic data released this morning, a report on existing home sales in the month of January may attract some attention on Friday.