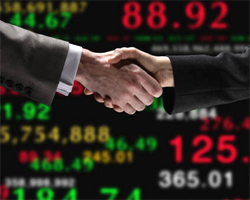 At the last scheduled meeting for this year, policymakers of the Bank of England unanimously decided to retain the record low UK interest rate and quantitative easing amid the uncertainty over the post-Brexit trade deal.

The nine-member monetary policy committee headed by Governor Andrew Bailey voted to hold the interest rate at 0.10 percent and the quantitative easing at GBP 895 billion, as widely expected, on Thursday.

At the November meeting, the bank had raised the size of the asset purchase programme by GBP 150 billion to the current level.

The committee today extended the availability of the term funding scheme for small and medium-sized enterprises for six months until October 31, 2021.

The BoE decision came ahead of the end of the Brexit transition period. The European Parliament has set December 20 as deadline for the post Brexit trade agreement.

As the forecasts are based on a Brexit deal, any failure on talks would force the MPC to call an emergency meeting rather than waiting until its next scheduled meeting on February 4, 2021, Thomas Pugh, an economist at Capital Economics, said.

Assuming there is a Brexit Christmas miracle, the economist said the economy will probably recover considerably faster in 2021 than the MPC does, meaning that the MPC won’t have to loosen policy further.

Although inflation eased to 0.3 percent in November, the MPC expects it to rise quite sharply towards the target in the spring, as the VAT cut comes to an end and the large fall in energy prices earlier this year drops out of the annual comparison.

As the November inflation was more than one percentage point below the 2 percent target, BoE Governor wrote an open letter to the Chancellor Rishi Sunak explaining the reason for the decline.

In the letter, Bailey said the MPC expects inflation to remain below 1 percent in the near term.

He noted that the effects of the Covid-19 pandemic have been associated with a sharp reduction in economic activity in the UK and globally, reducing UK inflation through a number of channels.

If the outlook for inflation weakens, the MPC said it stands ready to take whatever additional action is necessary to achieve its remit.

If trade negotiations did not reach an agreement, CPI inflation would be likely to be higher and GDP growth weaker.

“Compared with previous periods during which non-negotiated Brexit outcomes had been possible, the economy was starting from a weaker position with greater spare capacity, increasing the Committee’s tolerance for a temporary overshoot in inflation,” the bank said.

However, it would be important to ensure that medium-term inflation expectations remained well anchored.

The bank said the successful trialling of some Covid vaccines and initial plans to roll them out widely over the first half of next year is likely to reduce the downside risks to the economic outlook than previously assessed.

The additional fiscal measures in Spending Review 2020 are likely to boost GDP by an estimated peak of over 1 percent during 2021-22, the bank said.