Where are the jobs? NSW coal towns cling to the past until a better future emerges

Sue Moore, the mayor of Singleton, was eating lunch at a conference last year when an inner Sydney councillor sat down next to her and asked: “What do we have to do to get the people of Singleton off coal?”

“You’ve got to tell them where their jobs are going to be,” Moore replied. “It’s got nothing to do with opposing climate action.”

Moore and other local leaders in the Hunter region – the heartland of New South Wales’ coal mining industry – have been grappling with “the coal question” for years. But sensitivities around the region’s future escalated this week when the federal MP Joel Fitzgibbon resigned as Labor’s resources spokesman after a very public row over the party’s stance on climate action. 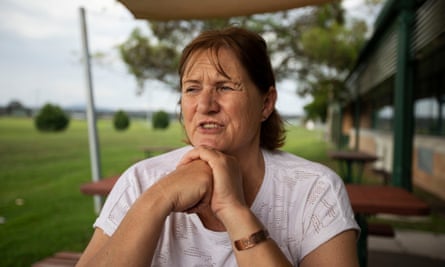 As Fitzgibbon argues the case for coal to win back votes in his formerly safe seat, others in the Hunter – mayors, unions and businesses among them – have begun planning for the long-term decline of the industry that directly and indirectly employs up to 61,000 people in the region.

Hydrogen, solar, wind and renewable energy parks linked to batteries have been suggested as future job creators as well as green steel produced with pumped hydrogen. Other proposals include the expansion of the agriculture and defence industries, the creation of an F-35 fighter jet maintenance hub, and the introduction of containers into Newcastle’s port so it can ship more goods and services rather than its current 90% reliance on coal.

The region could grow as a tourist and education destination, some say, while others want to turn abandoned coalmines into water-themed amusement parks when the vast open-cut pits that dot the region close.

However, a lack of clear government policy and investment in specific projects, combined with doubts about how many permanent jobs renewable projects can create, means the Hunter’s inevitable transition comes with an element of fear.

In a further sign of the impending transition, the upcoming NSW state budget is expected to redirect coalmining royalties into its sovereign wealth fund, as the Berejiklian government expects the roughly $1.5bn in royalties it receives each year to diminish in the face of renewables.

Prof Will Rifkin, chair in applied regional economics at the University of Newcastle’s Hunter Research Foundation Centre, says “a fair bit of the dependence” on coal, and community’s sensitivity about a transition, can still be linked to the closure of BHP’s Newcastle steelworks in 1999. 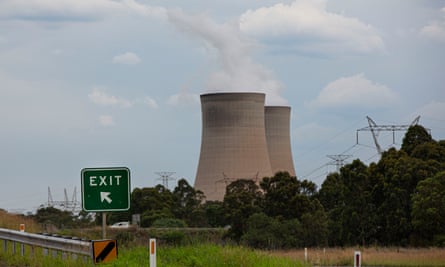 Rifkin says BHP was the anchor in town, and despite efforts to transition workers into new work, “a lot of them never got paid employment after the closure, especially those in their fifties”.

“There’s a transitional PTSD in the Hunter community,” Rifkin says.

He says coal has since helped the Hunter to ride out economic turmoil over the past 20 years, including the global financial crisis, but that the unemployment in the region is volatile as its exposed to sudden changes in coal demand and exchange rates. A decline in demand from China contributes to a “roller coaster” for jobs and spending in the local economy.

“When the coal price is up, people get hired in the region, when it goes down, people get fired.”

Rifkin notes the extent of the reliance on the coal industry – whose workforce is dominated by locals, not fly-in-fly-out workers – means the loss of one job in a local mine takes with it at least two more that depend on coal. 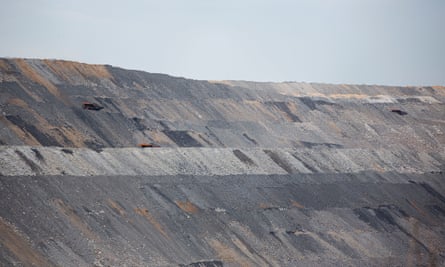 About 11% of globally traded thermal coal is dug from more than 20 coalmines across Singleton and the council to its north, Muswellbrook.

It is then shipped to 24 countries, primarily Japan, Taiwan, South Korea and China, from Newcastle, the largest coal port in the world and a significant player in the local economy. In 2019 it shipped a record 166m tonnes.

‘Joel has made it very clear they need to do better’

At the 2019 federal election, Singleton and Muswellbrook showed one of the highest votes for One Nation in the country, producing a 14% swing away from Labor in Fitzgibbon’s Hunter electorate towards a Singleton mining mechanic, Stuart Bonds, who ran as a “strong believer in the coal industry”.

“No other community is as dependent on coal.” 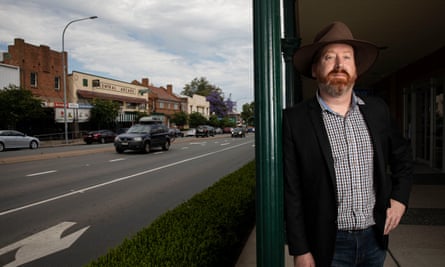 Rush, who has previously been a Labor state candidate, can see the reasons driving Fitzgibbon’s stand.

“We’re not having engagement from the National party, and of course the federal government is nowhere to be seen, and we can’t have a lack of engagement derail the transition process.

“The Labor party needs to do that too, and I don’t think they’re doing a good enough job. I think Joel has made it very clear they need to do better here,” he says.

Rush recently visited Victoria’s Latrobe valley with his Singleton counterpart, Moore, and other mayors, and came away with the conviction that what the transition to a new economy required above all was early planning, and genuine collaboration with the local community about future industries.

“There are very few examples around the world of good transitions, and plenty of disaster stories,” he says.

Muswellbrook Coal, a mine that has operated continuously for 114 years, is the first of the council’s six mines due to close, in two years. Some areas covered by the council are still earmarked for exploration and expansion.

Muswellbrook’s plan for the future includes more than $1bn of projects to be built between 2021 and 2027, from an AGL battery at the ancient Liddell power station, to a biofuel refinery facility, a wind farm on the Liverpool ranges and pumped hydro facilities.

But while the mines directly employ 900 people in Muswellbrook, and more from neighbouring towns, proposed renewable projects will provide only 150 operational jobs, Rush says. 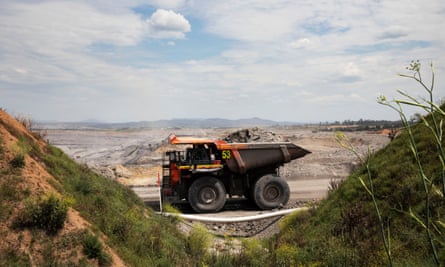 He wants clearer policies from government, and well-resourced investment, to create more confidence about long-term employment.

In Singleton, where there are 17 active coalmines, Moore agrees. She is part of a joint organisation of Hunter councils discussing diversification.

“There’s a lot of talk about transition and diversification, but no one seems to be actually doing anything towards it. Councils can’t necessarily do it on their own … they need state and federal government support.”

While she has friends and family working in the industry, and knows some coalmines are coming to the end of their life in the next five years, she acknowledges some have licences to operate for decades.

In addition to renewable energy ideas, Moore has explored water theme parks to be built in disused pits, as well as mushroom farms, other agriculture and tourism ventures. A promising plan for a medicinal cannabis factory, which gained necessary government approvals, failed to find financial backing.

The recently-formed Hunter Jobs Alliance, made up of unions and local environmental groups, including the Labor Environment Action Network, is among the groups trying to bridge the gap between the coal-dependent past and a cleaner but more nebulous future.

Fitzgibbon has condemned the “once proud” Australian Manufacturing Workers Union for collaborating with Lean, which he believes is “determined … to cost Labor another election”. 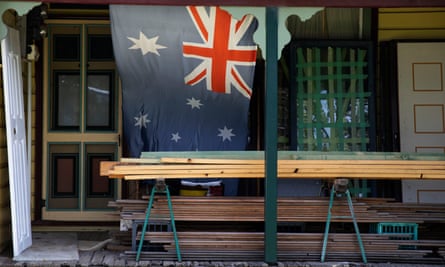 In the Hunter, about 85% of AMWU members work directly on coalmines or in related industries. Cory Wright, the union’s NSW secretary, believes it is his obligation to warn workers that shifts in global investment will influence their jobs, and to demand greater clarity from governments about climate action.

“Politics has driven a wedge between environmentalism and job security, that you can only have one or the other,” he says.

Wright has been leading worker information sessions about transitioning away from coal, and while he notes many are initially apprehensive, he believes most want to see a proactive approach from government.

“We know there will be changes in demand for coal, it’s just irresponsible to not warn our workers of the storm we see coming,” he says.

The national co-convenor of Lean, Felicity Wade, who is part of the Hunter Jobs Alliance, believes the focus on jobs is key to winning back voters in mining communities who abandoned Labor in the 2019 election.

“Talking vaguely about transition plans doesn’t cut it. We need to get to the point where we talk about which industries we’re backing as the future, and we need to get specific, about which plot of land facilities will be built on, and which towns they’ll be in, so people believe there will be job opportunities. 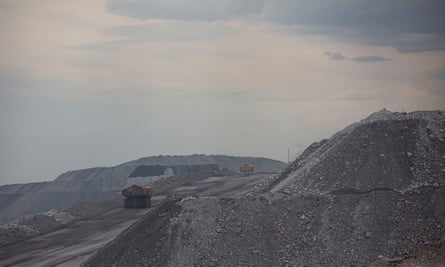 “Labor just don’t get it … Joel was doing nothing more than trying to get them back in touch with (their base),” Jordan told the Australian. Jordan did not respond to a request for further comment.

In Singleton, many workers remain sceptical about renewables as a source of employment.

Dump truck driver Shane, who did not want to give his surname, tells Guardian Australia discussion about climate action rarely acknowledge that communities like his will “turn into a ghost without the mines”. 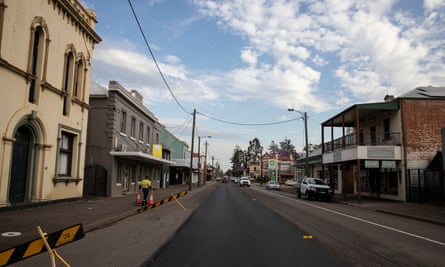 “If you take a job away from a thousand blokes, you’ve got to give them something to do.

“We’re talking about the future of our grandkids here,” Shane says.

Winery worker Kelly Buyers says he and his friends, several of whom work in the mines as mechanics, are frustrated at the dust produced by the operations.

“You can hardly breathe some days, and you have to clean your car every two days,” Buyers says.

His friend Callum Pope, who frequently works on mines in hydraulics, wishes there were more non-mining related jobs in the town.

The last time he lost his job, it took him a year to find a new job other than working as a dump truck driver in a mine.

Buyers says: “What mining has done here is terrible, but we’re a minority in thinking that.”

Suing for climate action: can the courts save us from the black hole of political inaction?