Suing for climate action: can the courts save us from the black hole of political inaction?

In the public imagination, blockbuster litigation involves grand courtrooms, passionate advocacy and granite-faced judges. These hallmarks were curiously absent from the recent denouement to a lawsuit between 25-year-old Mark McVeigh and his superannuation fund, Rest. No grand oratory from robed barristers, no victory-speeches on the courtroom steps – just a press release and a confidential settlement agreement.

What the conclusion to McVeigh v Rest lacked in symbolism, it made up for in substance. McVeigh’s case, which has resulted in Rest committing to a net zero carbon footprint by 2050 and a suite of short-term measures, is one of the most significant climate litigation outcomes in Australia to date. Its mastermind? A softly-spoken Sydney solicitor, with dual passions for surfing and climate action.

“This is a fantastic result,” says the lawyer, 42-year-old David Barnden. “It should give people hope that big organisations can make significant changes and get on the path to net zero.” His client is jubilant. “The entire superannuation industry is going to be looking at this case,” says McVeigh, who in September 2017 wrote to Rest asking for information on their approach to climate change – and ultimately sued them. “Outside Australia there is discussion about how pension funds should be managing climate risk,” he continues. “This case sends a message.”

For funds that are already taking climate risk seriously, the settlement validated their approach. “The case sets a global precedent,” says Kirstin Hunter, chief executive of climate-focused fund Future Super. “We do not have to wait for companies or governments to act, individuals have a huge amount of power in their super and can use it to push for change today. For the super industry, McVeigh v Rest should act as a warning that Australians are increasingly understanding the power of their money, and how it can be used to take climate action.”

On Thursday, AustralianSuper – the country’s largest superannuation fund with $180bn under management – announced it would adopt a net zero by 2050 climate policy. “It is in members’ best interests that AustralianSuper positions the portfolio to a net zero outcome,” AustralianSuper director Andrew Gray said in a press release. As part of this strategy, the fund had divested its holding in Whitehaven Coal.

Barnden, meanwhile, has no time for celebrations. He is busy preparing for two other groundbreaking cases in the courts, trying to fill the gaps left by climate inaction. So, in the absence of effective political will, can our judiciary save us from the climate crisis?

For anyone who takes time to understand the likely predictions, it is really difficult to turn a blind eye to it

“Litigation is not the answer,” Barnden says. Without political action, he suggests, judges can only do so much. “But it is one of the tools that is available to people in making change. As a nation, we are starting to wake up to how exposed we are to the risks of climate change. The law will respond to that.”

Born in Adelaide, Barnden has long contemplated a career at the intersection of law and the environment. “I was fortunate to have parents who took me to beautiful places as I grew up – the Flinders Ranges, Kangaroo Island and so on,” he says. “I gained an appreciation of biodiversity and how those places were threatened.” Barnden studied dual degrees in law and environmental science at Southern Cross University, graduating in 2004.

“Even then you could see how local councils were trying to deal with the prospect of sea level rise and coastal erosion,” he recalls. “But at a federal level it was being swept under the carpet. Ever since university, I have been interested in how the law interacts with the science. For anyone who takes time to understand the likely predictions, it is really difficult to turn a blind eye to it.”

After working in Argentina, Netherlands and England, Barnden returned to Australia for a job at plaintiff law firm Maurice Blackburn. He describes this experience, working on big class action litigation, as formative. “The firm had a certain boldness in identifying misconduct and a fearlessness in chasing it down,” says Barnden. “That was an excellent grounding to begin exploring the possibilities of climate law.”

In late 2015, Barnden joined Environmental Justice Australia (EJA) to lead its work on climate finance. “The folks at EJA were visionary in understanding that financial levers could be an effective way to approach the climate crisis,” he says.

Barnden commenced work on the McVeigh case while at EJA, alongside the world-first case brought by Commonwealth Bank shareholders claiming the bank had failed to properly disclose the risks climate change posed to its business. The suit was dropped when the bank, in a major turnaround, included in its 2017 annual report an acknowledgment from CBA directors that climate change posed a significant risk to the bank’s operations. CBA also promised to undertake climate change scenario analysis and said it would not lend money to the Adani coalmine. “The acknowledgment that climate change could have a catastrophic impact on shareholders and investors was in its infancy, but I was lucky to ride that wave,” Barnden said.

This wave animates much of Barnden’s work. He takes existing financial laws and applies them to climate change. In McVeigh, for example, Barnden argued that Rest had violated corporate law by failing to properly consider the material risk that climate change posed to its investments. In O’Donnell v Commonwealth of Australia, a case Barnden filed in July on behalf of a young law student, he argues that the federal government misled investors by failing to disclose potential climate impact when issuing sovereign bonds.

These novel cases require no great judicial leap of imagination; instead, each treats climate change as just another financial risk, which market actors are legally required to disclose and address. 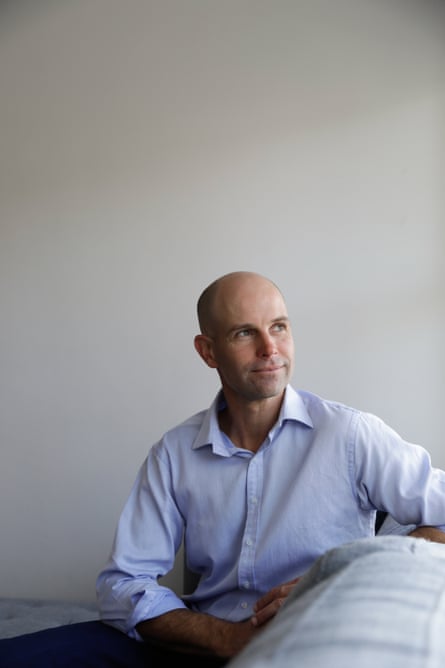 “David is one of the pioneers of next generation climate litigation in Australia,” says Prof Jacqueline Peel, an internationally-renowned climate law expert at the University of Melbourne. Peel uses the “next generation” label to distinguish from an earlier wave of cases, which focused on stopping individual mining and energy projects. The newer approach, she argues, “seeks more systemic, transformative change through holding corporate and government actors liable for their contribution to climate change.”

EJA senior lawyer Ariane Wilkinson sat opposite Barnden during his years with the organisation. “Climate risk is real,” she says. “Companies know it. But it is not until clients take matters to court that we are clarifying the law and seeing that risk crystallise. What David and his clients do is extraordinarily courageous. The law is catching up to the science.”

Wilkinson suggests that Barnden’s scientific knowledge propels his work. “Any lawyer that sits down and reads the climate science will find the courage to apply their legal skills to the climate crisis. This is not hyperbole – I have literally sat there and watched David read through scientific reports, look horrified and say, ‘well what can we do? How can the law respond?’ At heart, David is a legal practitioner who cares about the world and the people within it.”

After almost four years at EJA, Barnden decided to venture out on his own, establishing Equity Generation Lawyers in April 2019. The firm specialises in public interest climate litigation. “It was risky,” he admits. “I had many sleepless nights, wondering if it was the right thing to do.” The firm acts pro bono in some cases, including McVeigh and O’Donnell; Barnden says he also has paying clients, although declines to name them. Currently the energies of Barnden and his four staff are entirely consumed by climate cases. “There is plenty of work around,” he quips.

Barnden also relies on barristers appearing for his clients on a pro bono or reduced fee basis. Melbourne advocate Ron Merkel QC, a former federal court judge, was lead counsel in McVeigh and is also on the record in O’Donnell. “We are very thankful for that support [from barristers] – we could not do it without them,” says Barnden. “The professionalism and intellectual prowess they bring to these cases is phenomenal.”

Even with lawyers and barristers working for nothing, public interest litigation does not come cheap. Clients need to fund hard costs (including court fees, photocopying and travel), plus be prepared to pay the defendant’s legal fees if they lose. It is an expensive proposition.

“Australia is an outlier in terms of funding requirements compared to the rest of the world,” says Isabelle Reinecke, executive director of Grata Fund, which funds public interest litigation (but was not involved in McVeigh). “Our adverse costs burden is uniquely punitive. Clients need to not just fund the legal work, but also underwrite the risk of losing. Against the government or a big corporation, that’s hundreds of thousands of dollars.”

Grata and other organisations do their best to plug this gap. “Clients have to look at philanthropy, both local and international,” Reinecke says. But there is limited funding to go around. “What that means is that regular people and communities are being prevented from having their day in court,” she adds. “It is really difficult to bring this sort of litigation in Australia.”

Most of Barnden’s clients are teenagers or millennials, determined to overcome these hurdles. “They inspire me,” he says. “They are incredibly aware, intelligent, articulate and passionate. If these young people are tomorrow’s leaders, I have a lot of hope for the future.” Barnden sees his role as being a conduit for that passion. “It is easy to be despondent about climate change, to feel helpless,” he says. “But we pride ourselves on offering our clients the chance to make a difference. It is a privilege be able to do this work.”

Just days after settling with Rest, Barnden was back in the federal court for another of his cases – representing eight teenagers in proceedings against federal environment minister, Sussan Ley. Barnden is seeking an order to prevent Ley approving an extension to the Vickery coalmine in northwest New South Wales, arguing that the minister owes young Australians a duty of care that would be breached if the mine expansion goes ahead. The full case will be heard in March 2021.

It’s yet another unprecedented climate lawsuit. “David’s work is critical and groundbreaking in Australia,” says Reinecke. Further litigation is likely to follow, although Barnden is tight-lipped about the legal angles he is exploring. “I think you can expect more,” he says. “There is fertile ground for corporate actions, investor actions, as well as actions against government entities. We’ll have to wait and see – watch this space.”

One day, Barnden’s services may no longer be in such high demand. “I certainly hope the time comes that I am out of a job,” he says.

“What keeps me up at night is understanding that climate change is getting worse, that people in power are not doing enough to protect younger people, that we are faced with significant biodiversity loss, ecosystem loss, in addition to the impact on people’s future – financial harm, physical harm, mental health harm,” Barnden says. “I am driven to help people find an outlet to do something about that.”

Where are the jobs? NSW coal towns cling to the past until a better future emerges