‘Heads in the sand’: conservationists condemn US failure to protect wolverines

The US Fish and Wildlife Service has denied protection to wolverines under the Endangered Species Act, frustrating conservation groups who argue the species faces an existential threat from the climate crisis.

According to the ruling announced on Thursday, the FWS considers wolverine populations in the lower 48 states to be stable and threats against wolverines to be less significant than they previously thought. The agency is consequently withdrawing a proposal to federally protect the species.

The decision is based on a comprehensive species assessment completed in 2018, which calls climate change “the most significant stressor” of wolverines in the lower 48 states but argues enough snow will persist in the upper elevations of the wolverine’s range to accommodate the animal.

“If wolverines need snow, we think that there’s going to be enough snow out there for them,” said Jodi Bush, the Montana project leader of the FWS.

The FWS is also withdrawing the proposed listing in light of new research suggesting the US wolverine population is not genetically distinct from the population in Canada, rendering them ineligible for protection. Officials with the FWS cited a recent example of wolverines returning to the Cascades as evidence that wolverines are moving back and forth between the US and Canada.

“My primary concern is that USFWS’s decision was not based on good science,” said Jeff Copeland, a wolverine expert and director at The Wolverine Foundation. “Either it represents a gross misinterpretation of the science or a purposeful misrepresentation of the science in order to produce a preconceived result.”

Wolverines are members of a diverse group of mammals collectively known as mustelids, which includes weasels, badgers and otters. They are the largest land-based member of the family, famous for their elusive nature, love of snow and ability to punch above their weight. Three feet (one meter) long and 15 to 50lb (7 to 18kg), wolverines are compact animals resembling small bears with bushy tails, large skulls and powerful jaws capable of crunching through frozen meat and bone.

These traits, along with their snowshoe-like feet and dense coat of fur, make them highly adapted to snowy arctic and sub-arctic environments. Snow may be particularly important to mother wolverines, who typically choose to make their dens in snow tunnels or under snow-covered rocks or logs between February and April.

For these reasons, conservationists believe the climate crisis poses a unique threat to wolverines. 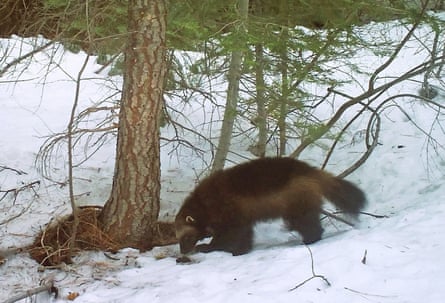 “This is an animal with extremely specific habitat requirements. It lives in a very narrow environmental niche that can be easily impacted by climate change,” said Copeland. “There is no reason to believe that it is adaptable to other climate situations.”

The species nearly disappeared from the lower 48 states in the 1900s, succumbing to fur trapping, predator poisoning and lack of prey due to sheep farming, but has since returned to much of its historic range. An estimated 300 individuals now live in pockets of high elevation wilderness in Washington, Montana, Idaho and Wyoming, with over 90% of their potential habitat on federal lands and wilderness areas. Each individual occupies a vast territory ranging from 100 to 500 sq miles (160 to 800 sq km) and has “an almost insatiable need to be on the move”, Copeland said.

US conservation groups have long fought for this snow-loving species’ protection under the Endangered Species Act, first petitioning for designation in 1994. But federal protection has remained as elusive as the wolverines themselves.

Since 1995, the FWS has twice denied wolverines protection because conservation groups could not provide “empirical data” on how wolverines’ range had changed over time because of humans. In 2013, however, the FWS proposed a rule to federally protect wolverines in the lower 48 states following new evidence that the species faced the threat of extinction, if a warming climate continued to shrink its habitat.

But the following year, the FWS backtracked, withdrawing the proposal. Since then, it has delayed making a firm decision on whether wolverines deserve federal protection. This week’s move is the culmination of years of pressure from conservation groups, which led to nine organizations filing a lawsuit against the agency in March. These groups, argue that the FWS is ignoring the best science available on how climate change will affect wolverines, as a Montana judge found in 2016.

Conservation organizations expressed their frustration at the latest withdrawal decision, announcing on Thursday that they would soon begin the process of filing a lawsuit in response.

“It’s a continued pattern of wanting to stick their heads in the sand about climate change and not do anything about the impacts that greenhouse gas emissions will have on species,” said Brad Smith, the north Idaho director of the Idaho Conservation League. “With the current administration, there’s been a rollback of many protections for the environment and for listed or proposed species.”

According to Smith, federally listing wolverines as threatened under the Endangered Species Act would ensure a more consistent approach to conservation: the FWS would have to draft a recovery plan that applies across the species’ entire US range and designates certain areas as critical wolverine habitat.

According to Bush, however, the fight to protect wolverines – led by the Western States Wolverine Conservation Project – will continue at the state level.

Copeland fears that necessary attention to the plight of wolverines could be slipping away. “We’re going to lose wolverines from places before we even knew they were in those places,” he said.

Researchers still have much to learn about these mysterious creatures, including how the climate crisis might interact with other human pressures. A 2019 study found that wolverines avoid areas of off-road winter recreation such as backcountry skiing and snowmobiling. As temperatures warm and snowpack decreases, wolverine habitat and backcountry recreation areas could increasingly overlap.

“We’ve been fighting to get wolverines the federal protection they deserve for decades,” said Andrea Zaccardi of the Center for Biological Conservation. “And we’re going to keep fighting.”

Fifth of countries at risk of ecosystem collapse, analysis finds