‘Why wait for it?’ How to predict a pandemic

How do you predict where a deadly tropical disease such as Ebola, possibly the most virulent in the world, will appear next? Since it first emerged in a small town on the edge of a Congolese forest, it has broken out in seven other African countries, often thousands of miles apart.

Sometimes it has spilled out of remote rainforest and then disappeared for years. Other times it has turned up in cities, baffling world bodies and governments that can only try to respond as fast as possible. But actually, given good data, the notoriously unpredictable zoonotic – or animal-borne – disease, which is passed to humans via primates and probably bats, may actually be quite predictable, believes David Redding, a researcher at the ZSL Institute of Zoology in London.

Redding and a team of disease ecologists from University College London (UCL) have built a computer model encompassing environmental disturbance and social change such as deforestation and urban expansion, the movement of host animals, expected climate change, temperature, rainfall, types of habitat, even transport links. It has accurately predicted where the last three outbreaks would emerge, though not their timing.

Redding’s maps show Ebola hotspots in expected places such as Gabon and the Democratic Republic of the Congo, but also in countries that have never had outbreaks before. “It’s too early to say whether we have captured the true pattern of risk,” he says. “We have used our understanding of how climate and habitat create the conditions suitable for the host animal species which carry the Ebola virus to exist and then where people and these animals are likely to contact each other.”

“There is no reason why this model should not be used to to predict outbreaks of more than 200 other known zoonotic diseases,” says Kate Jones, chair of ecology and biodiversity at UCL, who worked with Redding.

Until now, zoonotic disease prediction has relied on surveillance and preparedness. “Surveillance has primarily focused on identifying early cases of a virus, identifying the index – or first – case and then responding,” says Dennis Carroll, former US director for pandemic influenza and emerging threats. “But any virus that poses a future threat already exists. So why wait for it?”

Under Barack Obama, Carroll ran the US government’s Predict programme, which aimed to be an early warning system. By the time Trump closed it down in 2019, a recurring theme in this field, Predict had worked with virus hunters, universities, conservationists and natural history museums to collect more than 2m mucus and saliva samples from thousands of bird and mammal species.

He now chairs the Global Virome project, a $4bn (GBP3.1bn) plan to build on Predict and discover and genetically record all the world’s unknown viral threats. It is billed as “the beginning of the end of the pandemic era”, and a “change from responding to threats to proactively preparing for them to strike”.

Carroll says: “We need to understand viruses and their ecosystems better, gain a better understanding of hotspots. Compare weather forecasting: 50 years ago it was very limited, we could forecast a hurricane two days out. Now we can forecast them on an annual basis, pick them up off the coast of west Africa, and make pretty precise predictions. 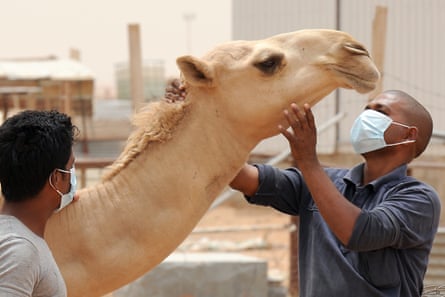 “We’re at the stage now with viruses where weather forecasting was 50 years ago. We have some data but we need much more and we need to run it through models like meteorologists do. We want to move the world of virology on from being a Mom-and-Pop operation. There are 4,500 coronaviruses alone. Why can’t we document them in their entirety? Predict showed us we could do it.”

The prize would be an open access atlas of the genetic makeup of all the world’s most dangerous viruses to better prepare for disease outbreaks and enable drug companies to develop broad-spectrum vaccines and drugs in advance.

The best way to predict zoonotic diseases, says disease ecologist Richard Ostfeld of the Cary Institute of Ecosystem Studies, may be to narrow research to where humans are disturbing natural environments the most. “There is a widespread misconception that wild nature is the greatest source of zoonotic disease. This idea is reinforced by popular culture portrayals of jungles teeming with microbial menaces. The great zoonotic threats actually arise where natural areas have been converted to cropland, pastures and urban areas,” he says.

It is equally important to focus on factory farming, says Bath University evolutionary biologist Sam Sheppard, whose research suggests that large animal farms create the perfect conditions for bacteria and other pathogens to spread between animals and humans, increasing the risk of potentially lethal “superbug” infections such as E coli, salmonella and campylobacter.

Sheppard argues that the insatiable global appetite for fresh meat – consumption of which has quadrupled since 1961 even as the total number of mammals, birds, reptiles and fish has halved – has greatly increased the chance of animal diseases infecting humans. “The overuse of antibiotics, crowded conditions, unnatural diets and genetic similarity make factory farms hotbeds for pathogens to spread among animals and potentially to emerge and infect humans,” he says.

We are in the “age of pandemics,” says Peter Daszak, director of the EcoHealth Alliance, which also had its research funding stopped by Trump in April because it had been working with the Wuhan Institute of Virology – the funding has since been restored. “We treat pandemics as a disaster-response issue. We wait for them to happen and hope a vaccine or drug can be developed quickly in their aftermath. But there still is no vaccine available for the Sars virus of 2002-03, nor for HIV/Aids or Zika, or a host of emerging pathogens. We need to start working on prevention in addition to responses.

“Pandemics are like terrorist attacks,” he says. “We know roughly where they originate and what’s responsible for them, but we don’t know exactly when the next one will happen. They need to be handled the same way – by identifying all possible sources and dismantling those before the next pandemic strikes.”

Sign up for the Animals farmed monthly update to get a roundup of the best farming and food stories across the world and keep up with our investigations. You can send us your stories and thoughts at [email protected]