There was a consistent message from business leaders to international trade secretary Liz Truss’s claims that she had signed a “historic” deal with Japan to lower tariffs and gain access to previously restricted markets.

Thank you, they said, but could you please sign a deal with the EU because that is our most important export market.

Truss is not a minister to be moved by such demands. The former chief secretary to the Treasury has a mission to bolt together as many trade deals with non-EU countries as she can while No 10 takes on the task of signing a comprehensive agreement with Brussels. Officials at the signing ceremony with Japan confirmed that the deal was expected to boost UK trade with the world’s third-largest economy by an estimated GBP15.2bn, though there was no date by which this figure would be achieved.

It would also add only 0.07% to UK gross domestic product, which compares with forecasts by government economists of a 5% loss of GDP from leaving the EU customs union and single market.

No wonder Mike Hawes, the boss of car lobby group the SMMT, and Adam Marshall, head of the British Chambers of Commerce, were quick to point out that a deal with the EU was far more important.

Truss was undaunted, though her attempts so far to sign other significant deals, and especially with the US, have proved fruitless.

Under normal circumstances, a deal with the US is not a priority. It might be the largest economy in the world and the single largest destination for UK goods and services exports outside the EU, but it is an open market characterised by low import tariffs. That was the situation until Donald Trump began his bruising battle with China over what he claimed were trade barriers damaging to US companies. In the last couple of years this trade war has expanded to take in the EU.

Importantly for Truss, the UK has been one of the biggest losers. In particular, single malt Scotch whisky has suffered from a 25% import tariff, pricing it out of the US market. 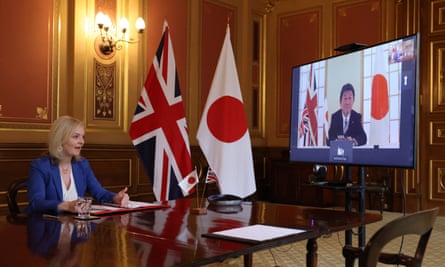 Truss needs to win over the US to push trade tariffs back down to more normal levels, or better still to zero. However, there is a high price to be paid for favours in Washington. Farmers are an especially powerful lobby group in the US and want full access to foreign markets as the price of any trade deal. They expect Congress to abide by this maxim, and it usually does.

Before the US pulled out of the Trans-Pacific Partnership (TPP) deal that included Australia, Vietnam and Japan, Washington had extracted concessions for US beef and other farm produce that were effectively banned in many TPP countries up to that point.

The former Australian prime minister Tony Abbott, who last week officially joined Truss’s advisory board, has long wrestled with criticism that his determination to sign trade deals meant that many domestic industries were thrown overboard, including agriculture and manufacturing.

Truss is under pressure to protect UK agriculture from being steamrollered by cheap US produce. If she is to uphold farming standards – ones that would allow the continued export of livestock and food to the EU – Truss must not lower UK rules in order to give access to industrial-scale farmers in the US who use growth hormones on their beef and chlorine washes on their chicken.

Whether to comply with the US or the EU rules is not a question that troubles business leaders. It is the EU every time.

This makes sense when you consider the numbers. If you include services industries, imports and exports between Britain and the EU were worth a total of GBP672.5bn last year, more than 20 times the value of UK-Japan trade and three times the GBP200bn sent back and forth to the US. A deal with the EU will be the historic prize.

A woman has got to the top of Wall St. But others still face a climb

The appointment this week of the first female leader of a Wall Street bank was greeted with a roar of approval. Jane Fraser, the Scottish-American banker from St Andrews who will lead Citi, is “a pioneer”, declared David Solomon over at Goldman Sachs.

It is indeed a landmark moment. But, now that a breakthrough has finally happened on Wall Street, a bastion of corporate maleness, should we expect a rush of female appointments? Don’t bet a cent on it. That hasn’t been the wider experience in the US or the UK.

The first woman to become chief executive of a FTSE 100 company was Dame Marjorie Scardino in 1997, and her appointment at Pearson was similarly hailed as groundbreaking. Almost a quarter of a century later, one can say the predicted rush of female FTSE bosses was a trickle. The highest number within the 100-strong club at any one time has been seven. Within banking, the first female chief executive of a UK top-four firm was Alison Rose at NatWest Group, appointed as recently as last year.

It’s true that the UK’s top boardrooms overall have become less male over the years. A third of board positions at FTSE 100 companies are held by women, the Hampton-Alexander Review found this year.

Yet the review also highlighted a “concerning lack of female representation in senior leadership and key executive roles” in FTSE 350 companies: only 15 female finance directors among FTSE 100 firms, for example.

In the US, the picture is similar: progress, but painfully slow. Only 31 women lead S&P 500 firms. On Wall Street, there are two men for every woman on banks’ operating committees, according to Bloomberg. Fraser’s success is a personal triumph, but the corporate world has not undergone a revolution.

Rio resignations signal the end for profit without accountability

When Rio Tinto announced last week that its chief executive, Jean-Sebastien Jacques, would be stepping down, it marked a new low for the mining giant – but potentially also an inflection point in corporate accountability.

Jacques resigned, alongside two other senior bosses, after investors lined up to condemn the company’s leadership for overseeing the destruction of an Australian heritage site of importance to Indigenous communities.

The executive clearout was by “mutual agreement”, according to a statement, but it should send a clear signal to others culpable for environmental destruction in the pursuit of corporate profit.

Environmental, social and corporate governance (ESG) may once have been regarded as a box-ticking exercise for company executives, but growing public intolerance of shoddy ESG standards can no longer be ignored. Investors, too, are unwilling to turn a blind eye to poor practice.

If the 2015 Samarco dam disaster, which resulted from a joint venture between miners BHP Billiton and Vale, had happened today it is difficult to imagine that executives would be let off as lightly as they were at the time.

The dam’s collapse left 19 dead, hundreds homeless and is considered the single worst environmental disaster in Brazil’s history. For Andrew Mackenzie, BHP’s then boss, it meant sacrificing a short-term bonus, even though hundreds living near the dam are still without homes.

The past loss of life and natural heritage at the hands of mining companies can never be replaced. But the swift condemnation of reckless corporate greed today could help safeguard the future.