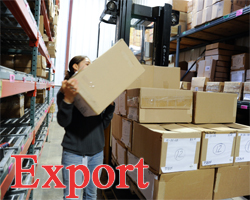 Germany’s exports expanded for the third straight month in July but the rate of growth moderated more-than-expected, data from Destatis revealed Tuesday.

Similarly, the increase in imports eased to 1.1 percent from 7 percent a month ago. Economists had forecast a 3.3 percent rise.

As a result, the trade surplus rose to a seasonally adjusted EUR 18 billion from EUR 14.5 billion a month ago. The surplus was expected to climb to EUR 16 billion.

On a yearly basis, exports were down 11 percent versus June’s 9.4 percent decrease. Likewise, imports slid 11.3 percent after falling 10 percent.

On an unadjusted basis, the trade surplus advanced to EUR 19.2 billion in July from EUR 21.3 billion in the previous year.

“While today’s numbers are good news for our call of surging GDP growth in the second quarter and suggest that the export sector is flourishing again, we should not get carried away by these numbers,” Carsten Brzeski, an ING economist, said.

They are still part of the mechanical rebound. In fact, the German export sector is still suffering from structural challenges including trade tensions, Brexit and global supply chain disruptions as well as difficulties among its main trading partners to cope with the virus, the economist noted.
Exports to China decreased by just 0.1 percent annually, while shipments to the United States, which have been hit particularly hard by the coronavirus pandemic, dropped by 17 percent. Exports to the United Kingdom showed a decrease of 12.6 percent.
Imports from China grew 7.4 percent, while that from the US declined 14.8 percent. Imports from the UK decreased 24.8 percent.
The current account surplus totaled EUR 20 billion compared to EUR 19.4 billion in the same period last year.
Compared with February, the month before restrictions were imposed due to the corona pandemic, exports decreased 12.1 percent, and imports by 11.5 percent.
Another report from Destatis showed that labor cost grew 1.9 percent sequentially taking the annual growth to 5.1 percent in the second quarter.
The labor cost index increased by a total of 4.3 percent on the fourth quarter of 2019, that was the quarter before restrictions were imposed due to the coronavirus pandemic in Germany.