In 2018, a super-typhoon destroyed 80% of the corals in Hoi Ha Wan bay off the Sai Kung peninsula in Hong Kong. In the city’s strongest storm since records began, winds reached 155mph (250km/h) and battered the reefs, leaving behind mostly scattered debris and broken coral skeletons. A few coral species survived, but these will likely take decades to regrow to their former state.

Sadly, this was no exception. Coral reefs are rapidly vanishing from the world’s oceans in large part because of the effects of global heating, which among other issues is increasing the frequency and severity of storms. In 2016 and 2017 alone, 89% of new corals on the Great Barrier Reef perished as a result of global heating-induced bleaching. Without decisive action to tackle the climate emergency, overfishing and pollution, it is estimated we will lose 70% to 90% of the world’s remaining coral reefs over the next 20 years.

A team of marine scientists and architects from the University of Hong Kong are trialling one method of restoring the reefs destroyed in the typhoon – and, they hope, others in future.

Using a 3D printer, they have created so-called “reef tiles” – hexagons made of terracotta – and placed them on the seafloor in Hoi Ha Wan bay.

The technology might be advanced but the idea is simple. “To create a hard bottom on a sandy seafloor,” says David Baker, director of the Swire Institute of Marine Science (Swims). “Sand is really not great for corals as it can move and bury or scour the coral’s thin tissues. Most corals that end up in sand usually suffer a slow death.” 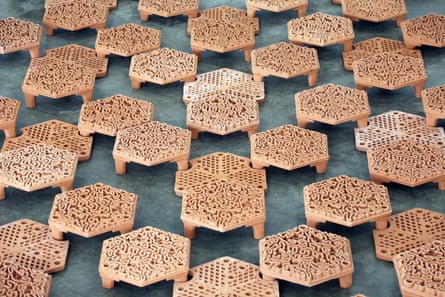 The tiles, on the other hand, stand on feet that elevate them from the seabed – allowing corals to grow higher in the water column, where they can access all the things corals like: sunshine, nutrients and food.

The idea is being tested in other locations around the world: scientists are working to restore reef habitats with 3D printing in the Maldives, which is home to the world’s largest 3D-printed reef, as well as in France and the Caribbean.

The tiles are designed in layers, using biomimicry to replicate the geometry of a brain coral, so as not to interfere with the growth patterns of real coral.

“The top layer is based on a biomimetic approach and serves as the primary space to attach the coral fragments,” says Christian Lange, an associate professor of architecture at the University of Hong Kong and leader of its robotic fabrication lab. “We designed this part so that the marine biologist can insert the different coral species in six designated areas.”

The tiles only cover 40 sq m for now, but if the experiment works it could be rolled out elsewhere. “Our hope is that the tiles provide a solid foundation for corals to reach a durable size,” says Baker.

Other artificial techniques to save reefs are being tested as well. In a practice known as “rigs to reefs“, decommissioned offshore oil rigs have been turned into artificial reefs in the US, Brunei and Malaysia. Scuttling ships – deliberately sinking them – is another method. The sunken American aircraft carrier USS Oriskany is the largest artificial reef in the world. Nicknamed “the Great Carrier Reef”, the carrier is located in north-west Florida and was sunk in 2006, using 22 simultaneous internal explosions, in more than 200ft (60m) of water. Today it is one of the most popular diving sites in the US. 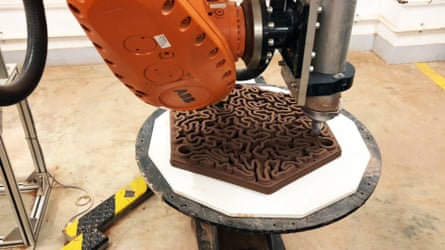 The team in Hong Kong, however, hope their use of terracotta is an improvement on other methods of reef-building. “There are other researchers around the world working on 3D printing in relation to artificial reef-building,” say Lange. “But most of them are using concrete as a material to print. I haven’t seen any other project that uses terracotta clay to 3D print this kind of work.”

Though terracotta needs to be fired to harden, it is considered more eco-friendly than concrete, as it requires less energy to produce; the manufacturing of concrete generates huge quantities of CO2 emissions.

“Concrete contains cement, which is very caustic,” Baker says. “In seawater it maintains a very high pH value on the surface – which is damaging to many types of marine species. Concrete structures often seem oddly devoid of life or have very unsightly biofilms of algae, much of which doesn’t support corals or other marine life.”

Terracotta is also similar to the calcium carbonate found in real coral reefs, which makes it more suitable. And crucially, ceramics like terracotta clay will naturally erode: in a few decades, the scientists hope, the tiles will be gone and all that will be left are the new corals.

Early results since the deployment last month have been promising. 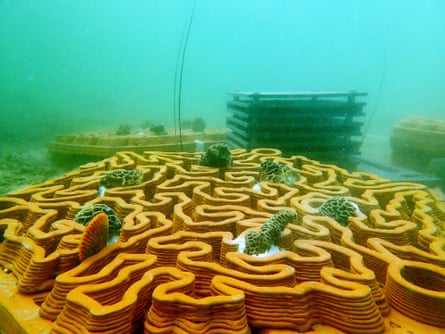 “It’s encouraging that we see many species like small fish and crabs taking refuge in the tiles almost as soon as they touch the seafloor,” says Baker. “My hope is that the government will allow us to plant patch reefs that within my lifetime could be significant biodiversity hotspots, enjoyable dive sites, and contribute to increasing corals within Hong Kong through their reproductive output.”

But the scientists all stress that no artificial reef technology is a panacea for coral reef decline. For one thing, they are expensive to produce and could not be cheaply scaled up.

“3D printing does have a promising role in generating small complex substrates on which coral larvae can be settled and reared,” says Alasdair Edwards, emeritus professor of coral reef ecology at Newcastle University. “But with several tens of thousands of square kilometres of reef already trashed globally over the last 50 years 3D printing is clearly not a solution, but may have some minor role. The only solution is to curb greenhouse gas emissions.”

‘We’re at a crossroads’: who do the fish of Hawaii belong to?

*Lagarde: ECB Continues To Stand Ready To Adjust All Of Its Instruments As…