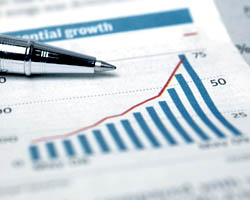 After failing to sustain an initial move to the upside, treasuries showed a lack of direction over the course of the trading day on Friday.

Bond prices bounced back and forth across the unchanged line before closing nearly flat. Subsequently, the yield on the benchmark ten-year note, which moves opposite of its price, edged down by less than a basis point to 0.640 percent.

Treasuries initially benefited from their appeal as a safe haven as disappointing European economic data added to recent concerns about the global recovery.

However, the early buying interest waned following the release of a report from IHS Markit showing U.S. business activity expanded at the fastest pace in over a year in the month of August.

The IHS Markit flash composite index of purchasing managers at manufacturers and service providers climbed to an eighteen-month high of 54.7 in August from 50.3 in July.

The increase by the index came as the IHS Markit reading on manufacturing activity reached a nineteen-month high, while the reading on service sector activity indicated growth for the first time since January.

The National Association of Realtors also released a report showing existing home sales in the U.S. continued to soar in the month of July.

Economists had expected existing home sales to jump by 14.0 percent to an annual rate of 5.38 million from the 4.72 million originally reported for the previous month.

“The housing market is well past the recovery phase and is now booming with higher home sales compared to the pre-pandemic days,” said Lawrence Yun, NAR’s chief economist.

Economic data may continue to attract attention next week, with traders likely to keep an eye on reports on new home sales, consumer confidence, durable goods orders, and personal income and spending.

A speech by Federal Reserve Chair Jerome Powell may also be in focus, as the central bank chief speaks at a virtual edition of the Fed’s annual Jackson Hole symposium.

Bond trading may also be impacted by reaction to the results of the Treasury Department’s auctions of two-year, five-year and seven-year notes.