Blue marlin remains a sportfishing dream – but for how much longer?

As a child, I strolled the docks during the Big Rock tournament in Morehead City, North Carolina. Fishermen strung huge marlins up by their tails. Bills down, the marlins’ flashing silver bodies drained to a dull blue-gray. Awestruck, people posed for photos with the dead fish, as they do today.

To reel one in, according to Dr Ellen Peel, executive director of the Billfish Foundation, “is almost like ballet. It takes a lot of orchestration and choreography. Everyone has their job. It’s a fascinating team sport to watch.”

A blue marlin fishing tournament is a spectacle to behold, and potentially a windfall. This year Michael Jordan and his crew – on his $8m, 80ft convertible Viking sportfishing yacht Catch 23 – brought in a 442.3lb marlin, good enough for fifth place in the Big Rock Tournament, which paid out over $3.3m in prize money in 2020.

Male marlins generally stop growing at 250-300lb, so sportfishing tournaments usually bring in large female fish. “The bigger they are – the more eggs they’re going to produce,” says scientist Dr John Graves. “Focusing on the biggest females is probably not the best thing to do for the future of the species.” 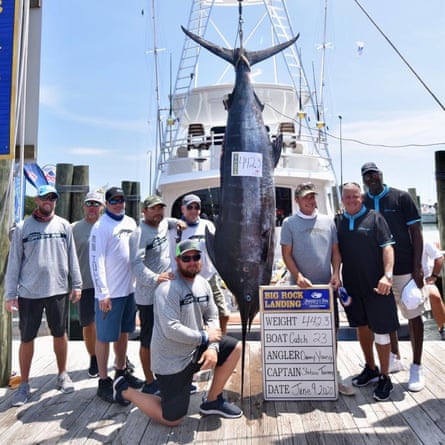 Atlantic blue marlin, who are highly migratory and aggressive predators, are one of the largest species of bony fishes, beginning as microscopic larvae and reaching lengths of more than 16ft. Revered by Ernest Hemingway – who chased the fish for decades from outposts in Cuba and Key West, Florida – the blue marlin’s legendary spirit was immortalized in The Old Man and the Sea.

Atlantic blue marlin are considered an iconic trophy fish, but are listed as vulnerable to extinction. Representatives from the National Oceanic and Atmospheric Administration (Noaa) report that since around 1990, the stock has been about 31% below where it should be, and the fishing mortality rate has been higher than set targets. Data pinpoints accidental bycatch – in longline fishing gear – as the biggest threat to the fish. Americans don’t usually eat marlin (some nations do), so the fish is managed for recreation instead of commerce.

I ask Graves why people continue to sportfish a vulnerable species.

“Blue marlin fishing is like watching paint dry for most of the day – but when it happens, it’s very exciting,” he tells me. “White marlin and sailfish don’t come in with the same attitude. When a blue marlin comes in and crashes on the bait – there’s a hole in the water. They’re so aggressive. They go ballistic. Lots of jumps, lots of greyhounding. They put out an awful lot of energy in doing it. With a big fish, it’s quite a spectacle. Plus, the fact that they can get so big makes them a desired target.

“In most tournaments,” Graves says, “the vast number of marlin are released. If the fish isn’t larger than 400lb, it isn’t going to win. If you bring in a smaller fish, it doesn’t look good for you or your boat.” But given the prize money structure at many tournaments, fish do come in, and fishermen hope to land one of the six-figure payouts.

“A dead billfish on the dock – in any country – brings very little value to anyone except those in poor nations who need it for protein,” Peel says. “We recognize that these tournaments bring a lot of money to coastal communities. But it’s also about human dynamics and how we respond to money.”

The historic Albatross Fleet of Hatteras, North Carolina, epitomizes tradition. In 1937, Ernie Foster’s father designed the first boat built for the purpose of offshore charter fishing in the state.

“The first marlin were caught near the Carolina coast in 1939 – but the winds of war were upon us,” says Foster, a genteel retired school teacher in his 70s. “There was no publicity for it. But in 1951 my father caught a 475lb marlin. Dare county’s publicity agent sent the picture to sports pages all over the country. That immediately turned Hatteras into the place where you wanted to go to catch a Blue Marlin – other than the Bahamas and Puerto Rico.

“In 1962, I was a mate working for my uncle. We caught the world’s record for the blue marlin at the time – 810lb.” That fish now hangs near the Hatteras library as a public monument.

But as much as the Foster family did to bring marlin sportfishing to North Carolina, they also helped promote an important catch-and-release ethos.

“In the summer of 1958, Dr Jack and Ellie Cleveland came to Hatteras on their honeymoon from Connecticut,” Foster says. “They were fishing with my uncle Captain Bill and caught a marlin. When they got him up to the boat, they did what people thought was the craziest thing they had ever heard of. They told my uncle to release the fish. And that was the first blue marlin ever released off this coast.

“The reaction was fairly uniform,” Foster says. “Derisive comments and snide remarks. Now it’s the other way around. Now you have to justify bringing in the fish.” 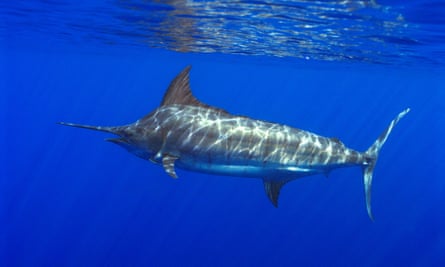 Foster, who chose teaching so that he could fish in the summers and carry on his father’s business on Hatteras, remains under the spell of marlins. “They’re powerful. When a marlin explodes on the bait and takes off jumping – there’s nothing else like it in the fishing world,” he says. “Their stripes are a vibrant blue. Their pectoral fins are a real bright blue as well. When they come in lit up – you’ll pay attention.”

The fishery is overseen nationally by Noaa, and internationally by the International Commission for the Conservation of Atlantic Tunas (ICCAT). These organizations manage the fishery with an eye toward maximum sustainable yield – not conservation. In the mid-90s, Graves says there was little support for measures to help billfish. Most countries were focused on commercial target species, such as tuna and swordfish.

The first measures to protect marlin were introduced in 2000, to reduce accidental bycatch in commercial fishing gear (such as trawls and longlines) and request landing reports. Countries are now required to release all live animals.

The US is limited to a total recreational catch of 250 combined blue marlin, white marlin and roundscale spearfish each year. Dr Peel estimates that about 77 blue marlin were landed in fishing tournaments last year.

“Does it make a difference in the stocks? Probably not,” she says. “But it’s about sportfishing integrity, and a demonstration that we’re committed to doing what we can to help conserve the species.”

She admires tournaments where marlin aren’t brought in to the docks but the excitement of the catch is shown on the jumbotron or social media. “You catch the fish, but then they should be properly resuscitated. You slow the boat down, keep the fish at the side, and move forward slowly so that oxygen continues moving over the fish’s gills. The fish has a better chance of living. You want to leave a feisty fish in the ocean.”

One thing a photographer, scientist and a sport fishermen agree on: an excited blue marlin is a phenomenal thing to witness in the wild.

“It was 1996,” he says. “I was diving and shooting 12 miles off the coast of Nassau, around the US navy’s buoy near New Providence Island. I was out there – maybe 20-30ft deep – to photograph mahi mahi and silky sharks.

“I love that blue water pelagic zone. You never know what you’ll see. Suddenly, I look down and see this blue marlin racing up from the depth. It was definitely agitated – hunting or pursuing something. The marlin saw me – with that big eye – and did a jackknife. He was flashing a little bit. It was the stuff of dreams.”

Skerry has photographed hundreds of species, but says, “These large, enigmatic billfish that ply the deep ocean are some of the animals that most stir my soul. We really don’t know much about their lives. That morphology! The bill. The giant eye that makes them the king of the deep. They can see in low light. They’re such magnificent creatures.”

“They are the ultimate fish,” fisherman Ernie Foster says, somewhat wistful. “If you told me I could see one more fish caught in my life, it would be an excited blue marlin.”

“Fish,” Hemingway once wrote, “I love you and respect you very much. But I will kill you dead before this day ends.”

If the blue marlin is to survive the forthcoming radical changes to its ocean environment – and wasteful deaths in commercial fishing line – sport fishermen may need to forgo killing a fish they love in order to help save it.